The famous blogging provider WordPress.com recently released a desktop app for customers managing their WordPress.com blogs, and this reminds me an old and discontinued desktop blogging application I used before: Windows Live Writer, so I did some search and happily found that it has come back to life.

Windows Live Writer is a desktop application from Microsoft for blog publishing. It was first released in 2007 and then became part of the Windows Live Essential suite in 2008. Windows Live Writer supports several major blogging platforms, such as WordPress, TypePad, Blogger, LiveJournal, and etc. WLW is feature rich, such as inline spell checking, table editing, photo publishing, and WYSIWYG authoring.

The initial set up of WLW is very simple and straight forward. After the installation of WLW, user will be asked to provide the web address of the blog WLW will connect to, the username and the password of the blog, then WLW will handle the rest automatically and magically. User can also choose to download the current theme locally so user can do live preview of the post they are writing or editing. Plug-ins are supported in WLW to expand the funtionality such as source code syntax highlighting. I used WLW for several years to manage my two WorePress blogs and I have to admit that WLW is the best blogging desktop application I have ever used, and I was very disappointed when Microsoft discontinued the development of WLW in 2012.

To my surprise that today I found out Microsoft released an open source fork of Windows Live Writer on December 9th, 2015 called Open Live Writer. If you used WLW before, then you will see from the above screenshot that Open Live Writer has almos the same interface as the old WLW, I think because it is still the initial public release, and it might change in the future release. All features in the old WLW are still in Open Live Writer, except the plug-in which will be available soon according to Open Live Writer web site. I give a big applause to Microsoft for reviving the well-loved desktop blogging app and make it even open source. And I cannot wait to start using it again to manage my blogs, and sincerly hope more features will be added in the future.

I was working on a project last week and I needed a US map with hotspot for each state, when user clicks […] 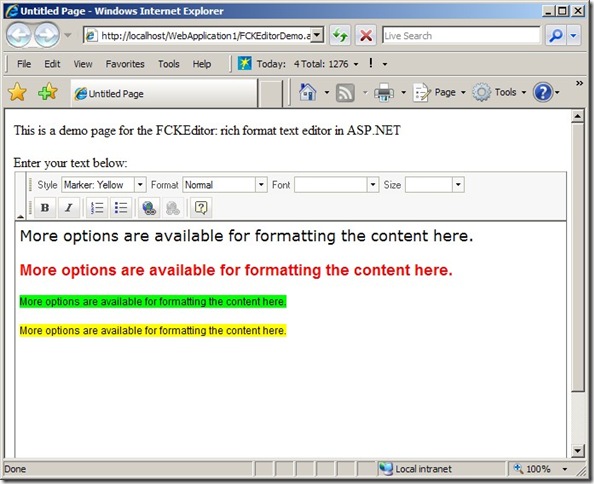 In my previous post, I demonstrated how to install and integrate the FCKEditor control, an open source, rich format text editor, with […]

I wrote a post in April regarding the pros and cons of several cloud storage/backup service providers based on my experience, such […]