[Update] I have been contacted with the information that Mandriva is no long a Linux distro, and it explains the link to Mandriva does not work. According to Wikipedia, “Mandriva Linux was forked and continues to survive as Mageia Linux. Other notable forks of Mandriva include OpenMandriva Lx and ROSA Linux.”

Disclaimer: to thank the reader who reported the broken link to Mandriva, I am here to add a link to their resource guide on Mandriva: http://www.whoishostingthis.com/resources/mandriva/. I am not associated with WhoIsHostingThis in any way.

I decided to add a new category for Ubuntu Desktop. I think Ubuntu Desktop edition is a great operating system and should deserve more attention. Unfortunately, I can’t find a reliable source of report on the current market share for Ubuntu, or for the combination of the mainstream Linux distros, such as Fedora, Ubuntu, SuSE, and . I also believe in order for Ubuntu to get more market share, more effort needs to be invested to increase the public awareness and education on Ubuntu, but not everyone agrees with it. When I try to ask my friends to give Ubuntu Desktop a try, the common first response from them will be like “Ubuntu? What is it? Never heard of it.” After explaining what Ubuntu is to them, their second response will be “is it easy to use?” or “is it like Windows?” It tells me that many people still think Windows and Mac are the only operating systems available (some even thinks Windows is the only one).

Among the mainstream Linux distros, the reason I pick Ubuntu is that it has become more and more user friendly. For example, the installation of Ubuntu is very straight forward, even a first-time user can figure out how to install it. It does not ask you what packages you want to install, what desktop environment you want to use, etc. For a new user, all they care is to install the system and to use it. That is actually what Ubuntu believes and advocates, and their philosophy is Ubuntu “Just works”, so Ubuntu installer just asks several simple questions, such as your time zone, your username and password, which partition to use for Ubuntu, etc., and you are set and you can just click “Install” to let the installer to handle the rest.

Another user-friendly tool in Ubuntu is Synaptic Package Manager… it makes program install/uninstall so simple. If you need to install Flash player in Ubuntu, for instance, just launch Synaptic Package Manager from System->Administration->Synaptic Package Manager. After you enter your administrative password, you will see a nice UI come up. Then just enter “flash” in the search box, a list of matching programs will be listed. Click the check box in front of “flashplugin-nonfree” and select “Mark to install”, then click “Apply” button at the top of the window, then sit back watching the program being installed seamlessly.

Now I am testing Ubuntu Desktop edition 9.04 Alpha 6 release code named Jaunty Jackalope which will be officially released in April 2009. Here are some screen shots of the installation:

I will post more information about how to use Ubuntu. Stay tuned. 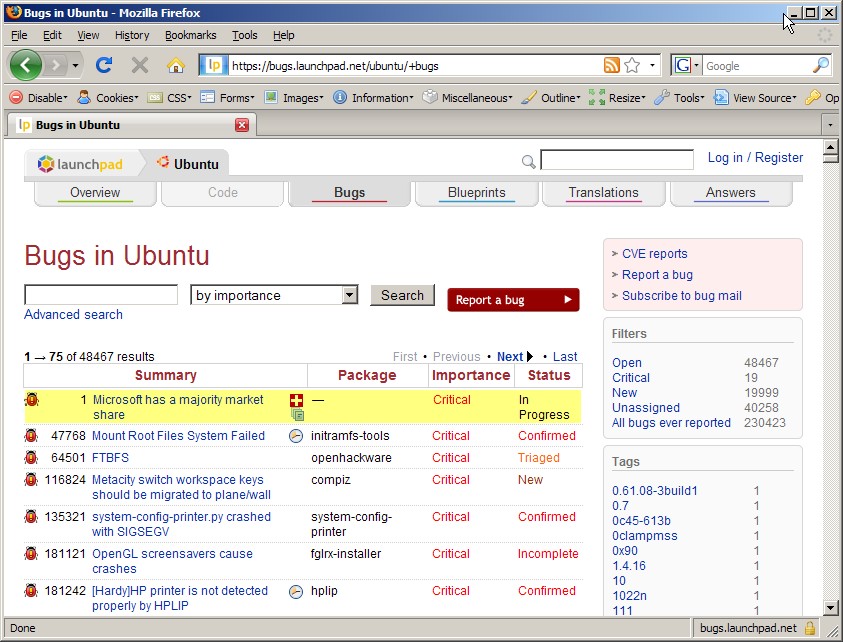 Since its launch in October 2004, Ubuntu has been focusing on providing better user experience in the Linux world and has done […]