I was very frantic with Ubuntu in the past week. Why? The reason is very simple: my laptop HP zu1175 is too old to handle Windows XP, but I do not want to throw it away, so I decided to give Linux a try. Here is my old HP zu1175 laptop’s specs:

I used to think Fedora Core would be a better choice than Ubuntu, but it turned out I was very wrong. (As a matter of fact, I am an Ubuntu fan now.) I started with Fedora Core 8, which is the latest release of Fedora Core. It froze up my computer when the installer was loading SCSI driver, and I didn’t even get a chance to see the graphic interface of the installation. Then I tried Fedora Core 7, and same thing happened. Well, I guess Fedora Core requires high-end computers, so I gave up on Fedora Core and decided to give Ubuntu a try.

I started with the latest release Ubuntu 7.10. Unfortunately, the installer didn’t like my old computer either. It gave me an error like this: “Buffer I/O error on device fd0. Logical block 0”. It seems that the installer was trying to find the floppy drive on my computer, but the thing is I don’t have a floppy drive at all! After several hours of searching the Internet, I found out it is a very common problem in Ubuntu 7.10 and I tried different ways but none of them could solve my problem. Then I decided to use a old version of Ubuntu for my last try, if it fails, then it will be the farewell time for my laptop.

At that time I happened to have a Ubuntu 6.10 Desktop CD, so I popped it into my DVD-ROM and let my machine boot from it. It worked! The installer didn’t give any errors and installed Ubuntu on my laptop smoothly. Then I followed this instruction to upgrade Ubuntu 6.10 to 7.04 (it didn’t allow me to directly go to 7.10) and followed this instruction to upgrade it to Ubuntu 7.10. The whole upgrade process was very simple and I was very happy with it until after the upgrade I found out that Ubuntu 7.10 could not recognize my DVD-ROM or CDRW-ROM, so I could use Ubuntu but without DVD or CDRW. Bump.

Oh well, I reinstalled Ubuntu 7.04 on my laptop and everything is working fine now and I don’t have to throw away my laptop, though I am not using the latest version of Ubuntu, but I am happy for a 8-year-old laptop.

Things I need to tackle down are:

I found some interesting comments on Linux. Here is the original post from Hamid Shojaee, founder of OnTime, and please pay attention to the comments made by Phillip Blanton (comment #7 and #8)

Since its launch in October 2004, Ubuntu has been focusing on providing better user experience in the Linux world and has done […]

First of all, let me make it clear: I am an ASP.NET web developer, so that means I use Microsoft Windows at […] 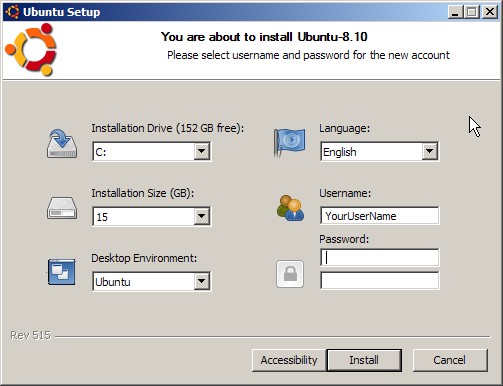 Wubi stands for Windows-based Ubuntu Installer, it is one of Ubuntu’s smart ways to convince Windows users to switch to Ubuntu. Wubi […]

Wow! Thanks for pointing out my comments! I love stumbling across mentions of me on the web. I guess no matter who we are, we are all our favorite topic.

Have fun with Linux.